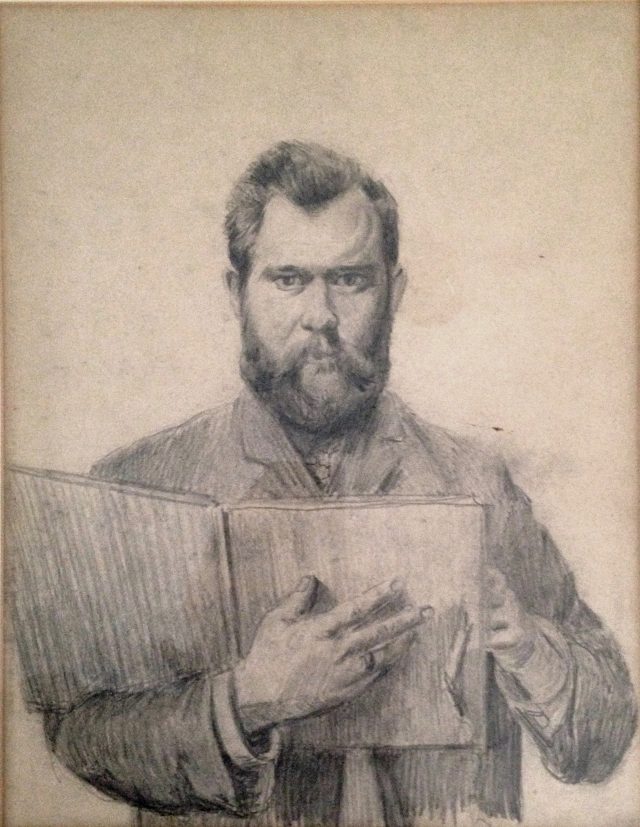 Born in Milwaukee in 1852, four years after Wisconsin gained statehood in 1848. He was third generation artist in his family. Charles’s grandfather Johann George Keller b. 1800, Meiningen Germany, studied sculpture and drawing with the scene painter at Hof Theater, Meiningen, and later became cabinet maker to the court. His official title was Koeniglicher Herzoglicher Hof Kunst Tischler. Charles’ father Amalius Keller B. 1824, Meiningen, studied art in Germany but became a cabinetmaker with his father Johann. Charles’ grandfather Johann brought his wife and only son Amalius age 21 to Milwaukee in 1845, then an Indian trading post. This was 3 years before the failed German revolution in 1948 which brought 3000 more German settlers to the new state of Wisconsin, at the time a 200,000 population.

From an early age Charles was a self taught painter, presumably tutored by father and grandfather. In 1873 age 21, he exhibited two paintings in the Cincinnati Industrial Exhibition. In 1875 age 23, he exhibited a painting “Training a Dog” at the Chicago Industrial Exhibition. In the Brevities feature of the Milwaukee Sentinel (page 8,col 2) on Aug 26, 1875 when he was 23, one finds, “A painter employed by Chas. Keller fell off a scaffold while painting a sign for Pollwoth’s home and enjoyed a plunge in the river.” Charles married Elizabeth Reinhold in May 6th of 1877 with his recorded occupation of painter on the marriage certificate. They had two sons, born in 1878 and 1881, both of whom died in their first year of life. Their daughter Anna, born in 1880, thrived. In 1882 Charles designed and painted the classic murals on the first asbestos curtain at the Chicago Theatre.

Travel to Germany to study art was reported in the Milwaukee Sentinel (page3, col3) on March 1, 1885 when he was 32, “Charles F Keller and John C. Reinhold will start for Germany today.” and, in the Milwaukee Sentinel on April 26,1885, “Charles Keller has gone to Munich to pursue his studies in art. His talent was marked, and he will undoubtably profit from residence abroad.” He travelled there with his father-in law. He enrolled in the Royal Academy of Art in Munich in November 1885. In that same month, November, his wife filed for divorce citing grounds of non-support for one prior year, one of the few grounds then permitted by statute. The documents state that her husband was able to make “twenty dollars per week or more” as a painter. A summons was sent to Munich and the divorce was granted on January 14, 1886.

Charles seems to have had a studio in Paris in the same building as Bougereau and studied with the same teacher as John Singer Sargent, (from family history by his daughter Carola). This may have been before enrolling in RA of A, Munich between April and November 1885.

In Munich he studied at the Royal Academy of Art under the tutelage of professors Ludwig von Loefftz, Franz Defregger and Nikolas Gysis. His daughter Carola, in a letter March 19, 1943 states, “He was a pupil of Gysis, Loefftz and Defregger. He spoke especially about Gysis, who was a Greek and one of the finest teachers in the world for portraiture.” This was the time of the Munich School style (1850-1914) characterised by naturalistic style and dark chiaroscuro. The Academy became one of the most important institutions in Europe for training artists and attracted students from across Europe and the United States. It was second only to Paris for Americans to study and popular because it was cheaper. In 1886 the large Renaissance Revival building complex was completed. He was a President of the American Artist’s Club in Munich during his time there which was important as from 1870 til 1884 over 300 Americans had come to study in Munich.  Over 50 German-American artists from Wisconsin studied at German art academies. He supported himself through sales of his works and patronage from the Milwaukee Pabst Beer family. He was commissioned by the family to make reproductions of old Masters paintings. He painted at Schloss Schleisheim outside Munich producing some of these reproductions for the Pabst family as remembered by his daughter who played on the grounds. 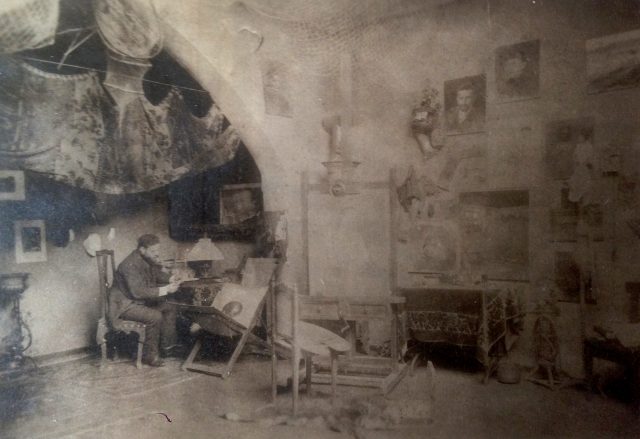 He married for a second time in 1887 to Helene Hafenbeck from Munich. Their first child Carola was born on September 9, 1888. They were out rowing on the Ammersee, a lake near Munich when Helene went into labor. They put ashore near Schloss Greifenberg and were welcomed to stay by Baron Perfall and recover from childbirth.  Charles painted many paintings while there including; the Schloss Kitchen and his baby daughter Carola in the arms of a Nurse. He had another child Henry (Harry) Edwin Keller, June 21, 1892 in Schleisheim, near Munich.

After 7 years in Europe, he returned to the USA to New York City in 1892 with his wife and two children, Carola (4 years old) and baby Harry. They had two further children Eleanor Oct 28, 1994 and Helen May 18, 1900 born in Brooklyn. He worked as a commercial artist for O.J. Goulde Co., later the Outdoor Advertising Co. where he was head of the Design Department. He painted in his studio in all his spare time. He was involved in the Art Students League, New York and the Salmagundi Club, New York where he had several one man exhibitions. In 1917 he exhibited his painting, “The Sheep-fold”  in the notorious New York First Annual Exhibition of The Society of Independent Artists. The exhibition was formed on the model of the Parisian Salon des Independants, showing works by any artist for a fee of $1 and membership of $5. It was the largest show ever assembled in the USA. Duchamp was on the board and suggested works be hung alphabetically. Duchamp also submitted his work “Fountain” by the non-existent R Mutt which was notoriously not admitted and Duchamp resigned from the board.

Charles Keller continued to paint from his studio on Long Island. Carola was often his muse as in a large painting of a field of sheep with girl which hung in the New Rochelle high school for many years. A painting was sent to the White House collection. 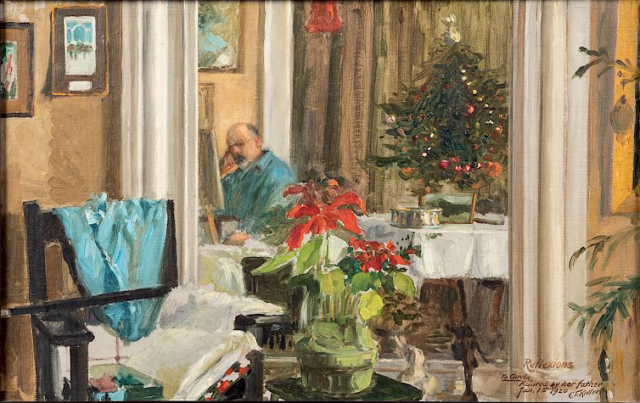 Age 66, Self-Portrait through a mirror at home, Christmas time 1920 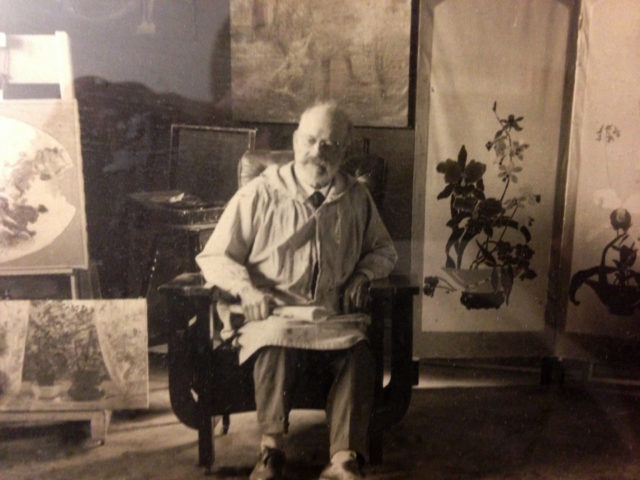 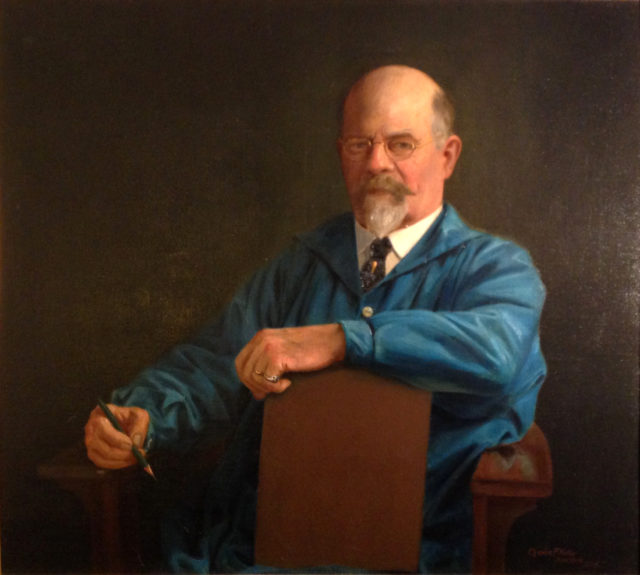 After contracting pneumonia, a few days later he died, on July 10, 1928 a month short of his 75th birthday. He was buried on the 12th in Greenfield Cemetary, Hempstead Long Island.